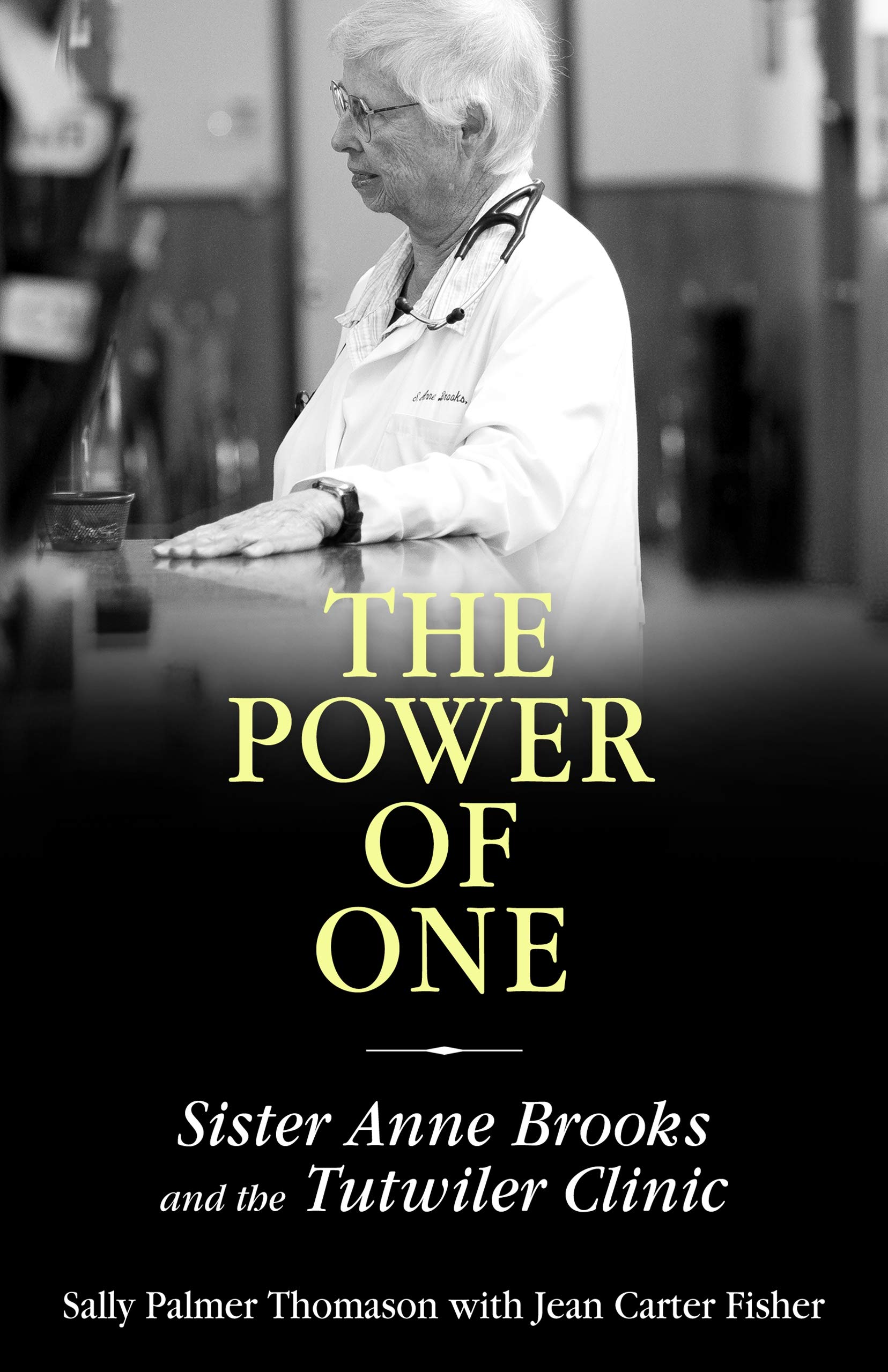 The American Osteopathic Foundation recently named Dr. Anne Brooks the 2012 physician of the year, for several reasons in which I have described here.

In a nutshell, she’s compassionate, caring and loving of all her patients, and as a nun, it probably helps that she relies on a little help from above.

But, even with her country doctor ways in which she still makes house calls, helps teach her patients to read and write, and building community centers and Habitat for Humanity homes with her own hands, she’s connected technologically – using an electronic health record in her practice – and is informed of many of the latest issues affecting healthcare and healthcare policy.

As a practicing physician, she also serves in the hospital setting, and she drives care for patients while in people’s homes, caring for them in their own environments. As such, she is considered a partner by those lives she’s touched, and she’s seen a great deal of change at the practice level.

The following are a few of her observations from 20 years of practice.

How has patient care changed since you became a physician in 1983?

There are mid-level providers on the scene who are not always appreciated by the patients, who seem to think they need a doctor or by their physician colleagues who often look down on them because it’s a less intense training.

There are RNs who get a doctorate in nursing, but what we need is bedside nurses who care physically and emotionally for and about patients. What I see happening is often the best nurses end up being paper pushers because of new and complicated regulations and disease tracking and length of stay requirements.

Are the patients getting more involved in their care or do they just not care?

I think we need a health blitz in our school curricula so that kids and parents/caregivers all know how to care for an illness or accidents and how to eat healthfully, and the manufacturers of all the fat food would make and sell something much more nourishing so that diabetes and obesity would not cause so much ill health and lower the mortality rate. Change has got to start in the home, but in our case, many parents didn’t go to school so what they don’t know and what they need to know and do are two different things.

Behavior needs to change, too. For example, too many patients have no teeth and eat soft starchy foods which only puts on weight; kids get soft drinks in their baby bottles way early on. So we teach and teach and review and teach some more and a few people get fired up because they learn they have power — which is a big deal at our office — to empower each patient is our major goal. And when we see people actually making lifestyle changes it is incredibly rewarding.

Why did you decide to implement an EHR?

Because of the benefits of speed in communication, ability to quickly access past clinical info and dealing with the handwriting deciphering issue (fewer mistakes  related to bad handwriting) the desire not to have to lug a pile of charts home to finish them; urging from forward-looking trusted colleagues; the availability of a grant; articles in medical journals that piqued my curiosity; and the ability to invite salespeople in to speak to the administrative team and then the staff, and pepper them with questions.

Are you more efficient because of an EHR or has there been little or no change?

Technically, I’d probably have to get someone to actually do a time study, but I feel more efficient, which removes some levels of stress for me.

When your career is over, what one thing will you want to carry on in your absence?

Patient-centered care given generously without regard to ability to pay meaning that every patient will get the best care.

I also want our patients to be welcomed with concern, care and compassion, and I want the caregivers to educate and empower patients so they can assume responsibility for their own healthcare, change their lifestyles, and learn how to pass on the education and empowerment to their families and friends.

And, I want caregivers to follow the M*A*S*H* model:

I’ve known Dr. Anne Brooks for nearly three years and I consider her a friend. She’s always receptive, available and willing to lend an ear, and offers insight I can only hope to have one day.

Plus, her stories are chronicle-like and filled with wit, humor and poignancy. And she’s got a tomb’s worth of them she could tell, and probably should. But, perhaps she doesn’t have the time. She’s too busy caring for the folks of her adopted hometown of Tutwiler, Mississippi.

Dr. Brooks is a nun. She’s taken a vow of poverty. In Tutwiler, she’s needed it. The people here are part of the one of the poorest in the United States. Patients pay for their care, if they can, with vegetables or other goods. Some times they drop a few bucks on the counter, but it’s a guarantee that by the end of the year, the clinic – Tutwiler Clinic – is going to be significantly short of operating funds.

More than 75 percent of its operating funds come from donations by individuals and grants. Those who wish can contribute through a PayPal donate button on the clinic’s site.

The Tutwiler Clinic is a nonprofit founded in 1983 by Dr. Brooks, D.O. and three other Sisters of the Holy Names. Its purpose is to provide wholistic healthcare in Tallahatchie County, located in the middle of the Mississippi Delta. According to its site, the median household income in the county is $18,800, while the US poverty level for a family of four is set at $20,650.

Two-thirds of the clinic’s new patients have no Medicare or Medicaid or other health coverage assistance. To say Brooks has operated the clinic as a personal mission for the last 20 years is no understatement.

The clinic is her calling; Tutwiler is her home.

She became a physician at age 40, following a career in education. However, for 17 years prior, from the time she became a nun, she was confined to a wheelchair because of what had been diagnosed as severe rheumatoid arthritis. She eventually met a physician in Clearwater, Florida, who asked to treat her and through osteopathic methods and acupuncture, eventually she was out of the chair and walking again.

The same doctor to help treat her was the same physician who encouraged her to join him in the medical ranks. She acquiesced and eventually began to study.

When she graduated, she wandered around the south through Mississippi, Louisiana and Florida seeking a clinic to serve. Next, she wrote several letters to towns that were in medically deprived areas offering her services. Tutwiler was only community to respond.

The town gave her a few funds to refurbish the clinic that had been shuttered since the early 1960s and she opened it in August 1983. By January she was seeing more than 700 patients a month. The clinic had a segregated waiting area when she arrived, but she immediately changed tat.

She serves as medical director and chief administrator at the Tutwiler Clinic, serving about 8,500 patients a year. She also is Chief of the Department of Medicine at the Northwest Mississippi Regional Medical Center in Clarksdale, where she has also is on the board of trustees and has served as Chief of Staff.

She is one of three doctors in the county, and currently mentors two medical students. She admits that she is desperate for another doctor at the clinic, which has a staff of 30.

She prays every day for anew doctor to join their staff, but to date (she’s been searching nonstop for months) she’s received little interest.

Brooks is a country doctor in so many ways, like you’d imagine from the 19th century: she makes house calls, and has seen the greatest level of poverty and unhealthful living. Her heart seems to explode with passion for those she cares for and the folks she cares for often suffer from sever chronic conditions, such obesity and diabetes, because of lack of quality nutrition because of their poverty.

She prays a lot for them. When she’s not praying, the 74-year-old who works 12 hour days, most days a week. She believes in wholistic care — taking care of the whole person and enabling a person to care for themselves.

When not providing care, she and her staff run a Habitat for Humanity program that has built 37 homes, and she also started a second-hand clothing store and a community center, with a gym and library and helps residents learn everything from life skills like cooking, to earning a GED, to staying fit with Zumba. To fund the community center, they sell locally made quilts.

Even though she lives in a world seemingly lost, if not a little forgotten, she’s dedicated the Tutwiler Clinic to employing the most current tools to ensure her patients receive the best care possible.

As such, she utilizes an electronic health record.

In her 20 years as a physician, “Care has changed in many, many ways,” she said recently.

There are new forms of care, new understandings of how various body systems that medicine can affect, and, most notable to her, are genome studies and the potential for tailoring medicine to a specific patient.

“You know, every direction you turn, especially in your area of expertise, there are new and exciting ideas about integrating medical records seamlessly into patient care,” she said, “or should it be the other way around?”

Perhaps it makes no matter. Machine at her side or not, she still knows how to provide the best care she knows how to provide, and the people she cares for are blessed to have her at home in her community. In many cases, they owe her their lives; at the very least she should be given some thanks.

Perhaps that’s why the American Osteopathic Foundation recently named her the 2012 physician of the year.