Through its Sustainable Development Goals, the United Nations has identified maternal and child health (MCH) as the number one indicator of the health of a nation. MCH represents such health conditions as maternal mortality and morbidity as well as infant mortality and low birth weight during labor, delivery, and the post-partum period. While MCH is often thought of as an issue in the developing world, the United States suffers from the highest maternal mortality rates amongst developed nations.

Its rate of 20.1 maternal deaths for 100,000 live births stands in stark contrast to France’s 8 and Italy’s 2. According to the World Health Organization (WHO), maternal mortality is a health indicator that can show wide gaps in social conditions. It demonstrates the difference between the poor and the rich, however, such distinctions in health outcomes are too common. What may be less apparent is that MCH issues also reflect differences between racial backgrounds despite an individual’s income.

According to the Center for Disease Control and Prevention (CDC), The maternal mortality rate for Black women is over three times that observed for White women at 38.9 vs. 12.0 deaths for 100,000 live births.  This disparity only increases with age. Most pregnancy-related deaths are preventable, however racial disparities in pregnancy outcomes have persisted overtime.

The state of Maryland serves as a microcosm of the disparities in maternal health outcomes across the US. Overall, the state has a rate of 19.7 deaths per 100,000 live births, ranking in the middle of US states overall but has been rising in recent years. (Louisiana is at the unfortunate end of the spectrum with a rate of 58.1 and California enjoys the top spot with the rate of 4).

Just as there is a disparity across the country, maternal mortality is not evenly distributed across Maryland with nearly 60% of such deaths occurring in three of the state’s 26 counties – Baltimore County, Baltimore City, and Prince George’s County. These counties noticeably have the highest African American populations in the state as well further highlighting the disparity.

Given that the rates of maternal mortality are unevenly distributed, a broad-based interventional strategy may be ineffective as it may not reach those at high risk. A targeted approach may be more effective. Therefore, what is needed is a mechanism to identify who may be at high risk of maternal mortality, and where interventions are most likely to be most impactful.

Geospatial analysis allows for this. This mechanism uses health indicators to identify differences among local populations that are likely to cause poor outcomes. A geospatial analysis can track down to the community level maternal health risk factors, such as obesity and diabetes, in addition to trends in population growth and demographic changes, along with social determinants of health. Through these measures, a comprehensive risk stratification can be established to help community health and wellness organizations, women’s health providers, and health systems have the visibility they need to truly make a difference.

This one additional critical step can enable the care interventions that reduce the instances of maternal mortality.

The vast majority of these deaths are preventable and come at a huge cost, making the losses all the more tragic. Studies suggest that maternal mortality has a statistically negative effect on GDP throughout the world,10 and that a reduction of maternal mortality in high-income countries will lead to large increases in GDP. Evidence suggests that for every 1% increase in maternal/child health measures, Baltimore alone could see a 4.73% increase in its GDP, allowing for a better allocation of resources. 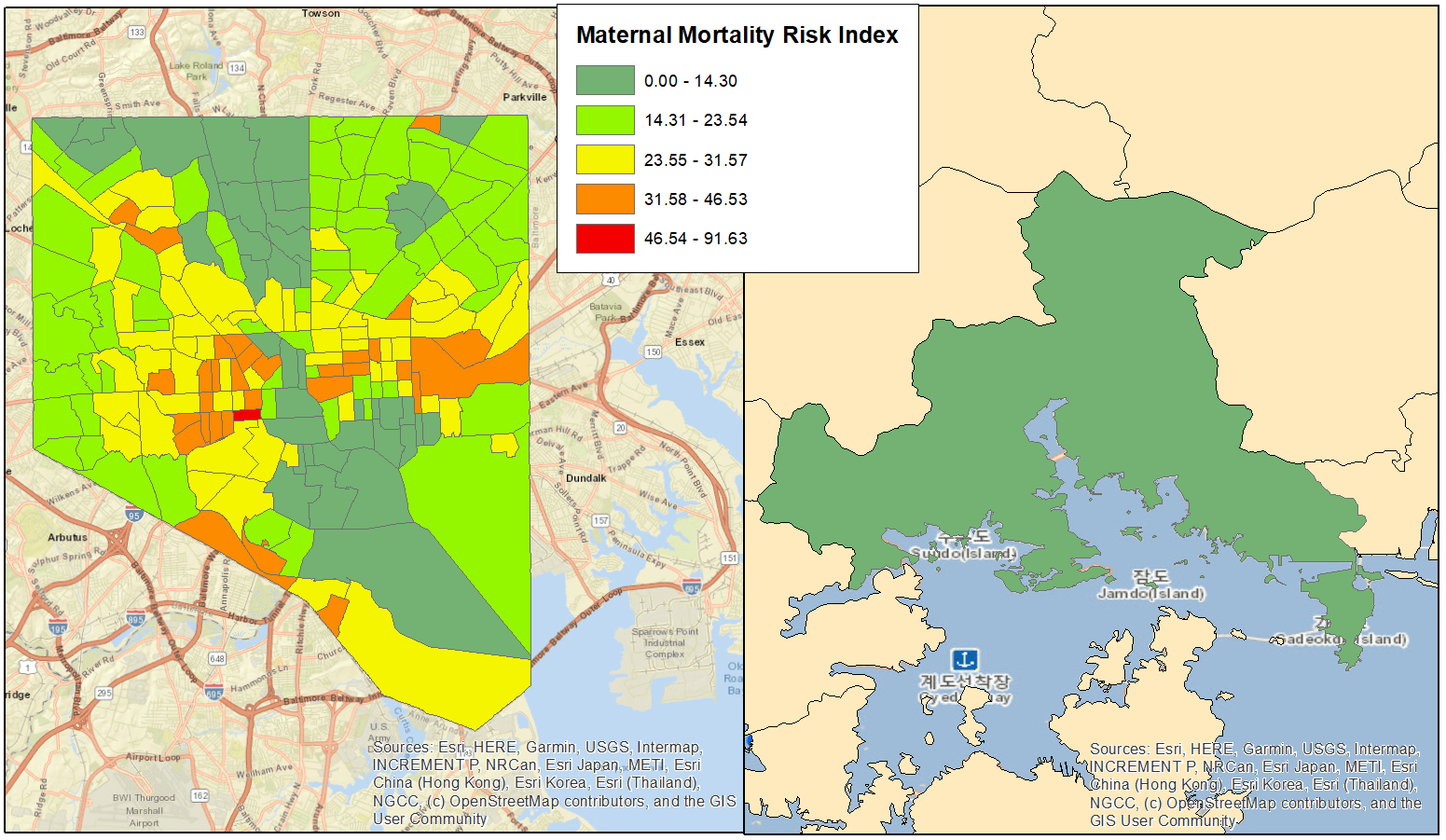 It behooves Baltimore, and the U.S. as a nation, to reduce maternal mortality for three reasons:

Geospatial analysis of the social factors associated with MCH issues represent the tools needed to identify those at risk and direct resources where they are most needed to lessen the rates of maternal and child health complications and close the longstanding racial disparity gap.