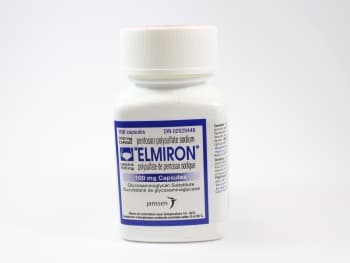 Elmiron is the brand name of the drug pentosan polysulfate sodium. This medication is used to treat pain and discomfort associated with a bladder disorder called interstitial cystitis. Prolonged use of Elmiron has recently been linked to pigmentary maculopathy, which is damage to the retina.

Consequently, Elmiron’s manufacturer, Janssen Pharmaceuticals, is being sued for failing to warn patients of the risk of severe and irreversible vision problems caused by this drug. If you’ve suffered vision problems after taking Elmiron, you may be eligible to join a class-action lawsuit.

Elmiron was approved by the U.S. Food and Drug Administration in 1996 for the treatment of pain in patients suffering from interstitial cystitis. Elmiron must be prescribed by a doctor, and there is no generic version available in the U.S. It is not understood exactly how the medication works, but it is believed to provide a protective coating to the lining of the bladder. It is not actually a pain medication and must therefore be taken continuously to achieve the desired effects.

What damage does Elmiron cause?

Elmiron is known to have a number of mild side effects. Most notably, it is a weak anticoagulant and therefore may increase bleeding in patients. For this reason, Elmiron is often discontinued prior to surgery to avoid excessive bleeding, and it may be dangerous to take simultaneously with other blood thinners, aspirin, or anti-inflammatory medications such as ibuprofen. Other possible side effects include nausea, diarrhea, bloody stool, upset stomach, headaches, rashes, hair loss, dizziness, and bruising.

Unfortunately, an unforeseen side effect of Elmiron appears to be potentially serious eye damage. The medication was found to cause retinal damage in about one quarter of patients with significant exposure to the drug — an average of 5,000 pills over a period of 15 years. Most of these cases occurred in long-term users, after three years or longer of taking the medication. A high total cumulative dose of the drug taken by the patient seems to be a risk factor for developing eye damage.

Symptoms reported among patients included blurry vision, difficulty reading, and slow adjustment to low light environments. Patients may be diagnosed with conditions such as pigmentary pattern dystrophy, age-related macular degeneration, retinal pigment epithelium injury, or retinal maculopathy. Patients showing no signs of toxicity should be checked for retinal damage at least once a year, and those with already apparent damage should discuss with their doctor and seriously consider discontinuing the medication to prevent further damage. Toxicity in the later stages of the progression of the disease can result in permanent vision loss.

How can you join an Elmiron lawsuit?

Elmiron has been used for nearly 25 years to treat interstitial cystitis, and hundreds of thousands of patients have taken this drug. Interstitial cystitis sufferers tend to be women, representing approximately 90% of the total number of diagnosed patients.

If you have taken Elmiron for the treatment of interstitial cystitis and suffered subsequent eye damage, you may be eligible to join the lawsuit against the manufacturer of this drug. You may be entitled to compensation for your injuries and loss of quality of life. Contact Balkin & Mausner Injury Lawyers, LLP for a free consultation to review your case and determine your eligibility for inclusion in an Elmiron-related lawsuit.