Salaries for healthcare IT professionals are on the rise, but they aren’t growing as fast as some other healthcare positions. That may be impacting satisfaction levels, according to a recent survey. Healthcare job site Health eCareers polled nearly 20,000 U.S. healthcare workers and found that the average annual salary for healthcare IT professionals increased 2.2 percent from 2015 to 2016. However, some of the other positions included in the survey saw more sizeable gains. For instance, those working in academics, research, administration, operations and allied health saw compensation increases in excess of 10 percent.

With more available jobs than professionals to fill them, hospitals, healthcare clinics and other providers are increasingly willing to loosen their purse strings and pay higher wages to both current employees and new hires. These factors have created a perfect storm of opportunity for healthcare workers, and 87 percent report that their pay is the same or has increased compared to a year ago. Survey respondents pointed to merit raises or employer changes as the primary reasons for their increase. There were exceptions, however. Nurses and healthcare executives saw a 3 percent and 13 percent drop, respectively. 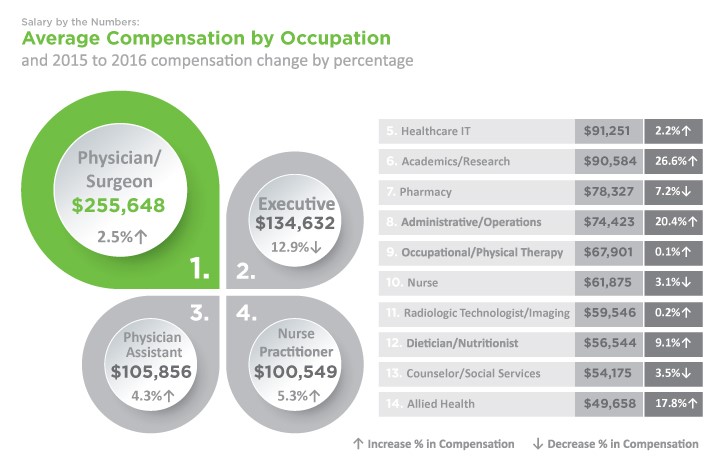 $91k is Average for Healthcare IT

Location seems to influence pay, with salaries varying widely from state to state. For instance, healthcare IT professionals in California earn an average of $95,224 per year, while their counterparts in Texas make nearly 6 percent less, averaging $89,758 a year.

Health eCareers also found big pay discrepancies by types of healthcare IT disciplines. Health information technology executives are far and away the best paid, with a median annual income of $127,500. IT technology managers also do well, with median earnings of $111,500 per year. Further down the pay scale are healthcare informatics employees at $74,500, and toward the bottom are health information technicians, who report median salaries of just $50,500.

Despite the fact that most are making more than they were in 2015, fewer are satisfied with their current salaries than they were a year ago. Fifty one percent of those surveyed said they’re satisfied, a 4 percent decrease from 2015. Of the healthcare IT workers who said they’re dissatisfied with their salary, the most common reasons given were that their salary is below average for similar jobs in their area and that their salary doesn’t reflect their years of experience.

What concerns are top of mind for healthcare IT pros in the coming year? The biggest is low or no salary increase, cited by 32 percent. Another issue that seems to be weighing more heavily on IT vs. other healthcare positions is the ability to find an appropriate new position for their skillset — it was called out by 29 percent of healthcare IT professionals, but just 19 percent of nurses and 11 percent of physician assistants. Other concerns high on the list are company stability and staff morale.

But there’s good news too: because of high demand, 89 percent of healthcare IT workers are confident that they could find a favorable position should they decide to leave their current situation. That said, many don’t have immediate plans to move on. Less than 10 percent said they’re unhappy in their current positions and looking to make a change as soon as possible, while 59 percent report being happy in their current role.

The full 2016 Healthcare Salary Guide can be accessed here.