According to a recent Accenture survey, more tech-savvy seniors are seeking digital option for managing their health services remotely. With an estimated 3.5 million U.S. citizens a year expected to reach 65 years-old through 20231, many want access to healthcare technology, such as virtual physician consultations (42 percent) and self-serve tools (62 percent) like online appointment scheduling. Only a third of healthcare providers currently offer such capabilities.

Accenture says that the rising population of seniors are active online. Internet use between 2000 to 2012 tripled for those 65 and older and doubled among those 50 to 64 years old. Accenture says that at least three-fourths of Medicare recipients access the Internet, at least once a day, for email (91 percent) or to conduct online searches (73 percent) and a third access social media sites, such as Facebook, at least once a week. 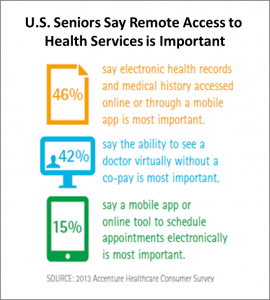 Two-thirds of seniors (67 percent) surveyed say that access to their health information is important, but only 28 percent currently have full access to their electronic health records. Similarly, 70 percent of those surveyed believe it’s important to be able to request prescription refills electronically, but, fewer than half (46 percent) say they can do so today. And, the majority (58 percent) want to be able to email healthcare providers, but only 15 percent say they currently have that capability.

“Just as seniors are turning to the Internet for banking, shopping, entertainment and communications, they also expect to handle certain aspects of their healthcare services online,” said Jill Dailey, managing director of payer strategy, Accenture Health.

“What this means for providers and health plans is that they’ll need to expand their digital options if they want to attract older patients and help them track and manage their care outside their doctor’s office,” he said.

“As the digitally engaged senior patient population continues to grow, healthcare systems need to consider the role the Internet can play in making healthcare more convenient for patients of all ages at every touch point,” Dailey added.

It’s clearly obvious that the further we come along, the less likely we are going to spend time discussing patients’ lack of access or engagement. As the population ages, the more and more people are going to have access or want access to their record. This is going to become a non-issue and time will alleviate it.

Even though it’s unfortunate now that this is the issue, it quickly will not be and there’s simply nothing else that can be said about it.

Where relevant, the consumer survey findings were compared to Accenture’s Medicare technology research and the Accenture Doctors Survey. The survey was fielded by Harris Interactive in July 2013.