I love infographics. Readers of this site know that. As such, the following is a surprising and interesting image: What patients value in the United States. From Vision Critical, as the healthcare industry goes through a significant transformation, the organization claims that it’s more important than ever for organizations to understand what drives patients’ perception of value and put proactive measures in place to better meet their needs.

Vision Critical, a provider of research and data, conducted a survey in October 2013 of more than 1,000 Americans about what influences their choice of healthcare specialists and treatment facilities, and on how they value their overall treatment. The following findings highlight the three factors that drive patient loyalty and offer insights for healthcare providers and any brand that provides face-to-face service: 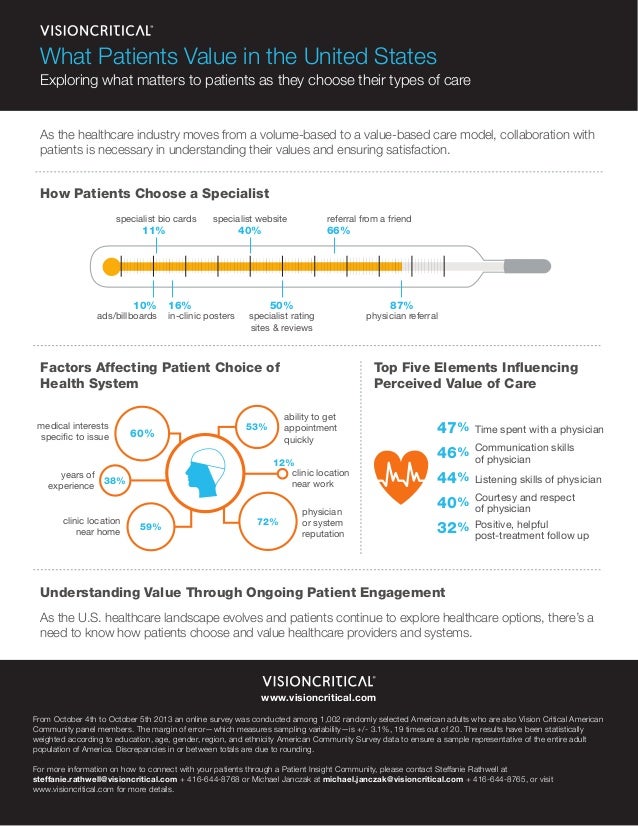 From your experience, do you find that patient’s choose a specialist from a billboard? To me, that’s the equivalent of finding a lawyer the same way. There’s just something ambulance chaser about it. After all, it’s not like we’re buying beer. The good news, though, is that the majority of patients select a specialist from their referring physician so all hope is not lost.

Patients choose a specialist based on the reputation of the facility, in large part. There are other factors, of course, but brand goes a long way, which this infographic is skewed to reveal given Vision Critical’s mission state of building brands for its clients. However, if you’re looking to build a brand as a technologically advanced health system and you’re not making the investment in systems and IT, this will play a role and your money will soon be found not to where your moth is to be.

Choosing a physician close to work also doesn’t factor highly into a patient’s final decision. Makes sense to me. If I’m going to the doctor, I want to be close to home as I always head there when done. I almost never return to the office.

Finally, I found it interesting that most patients select a physician based on the amount of time the doctor spends with them. Highly logical, but in a world where the volume-based approach to care has been the norm and practices are slow to move to a value-based model, there likely going to lose out the longer it takes them to change.